The old students of the college (Alumni) are enrolled as members of the Alumni Association. Distinguished Alumni members are honored at various functions of the college. The application form for membership can be had from the office superintendent or downloaded from our website:
Alumni Body Form 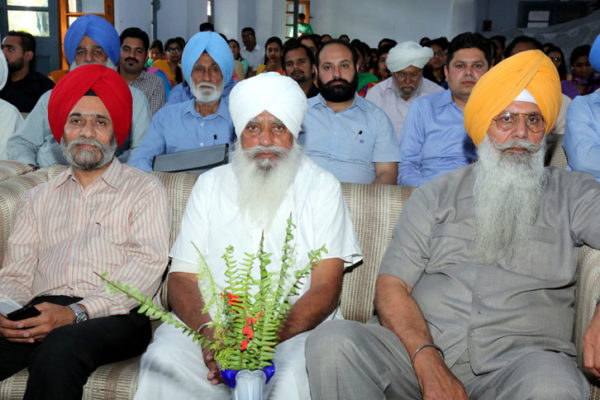 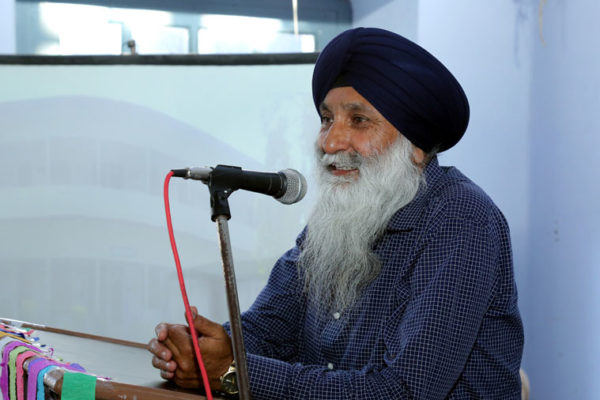 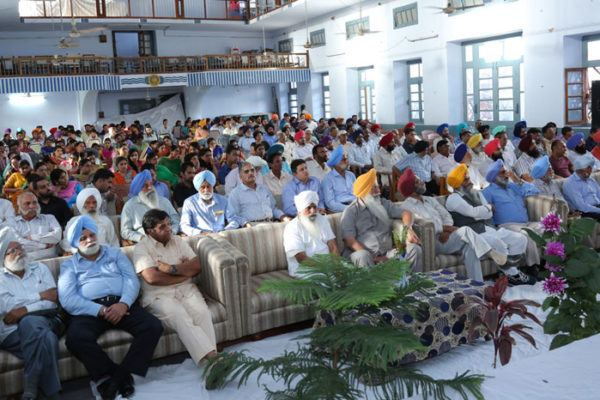 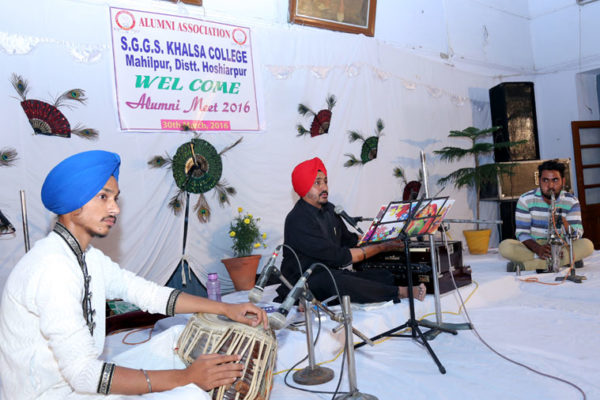 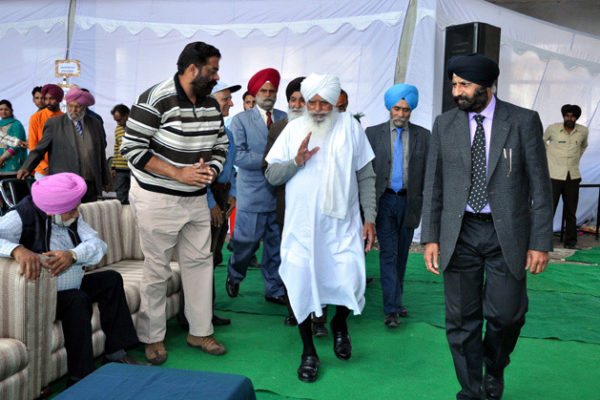 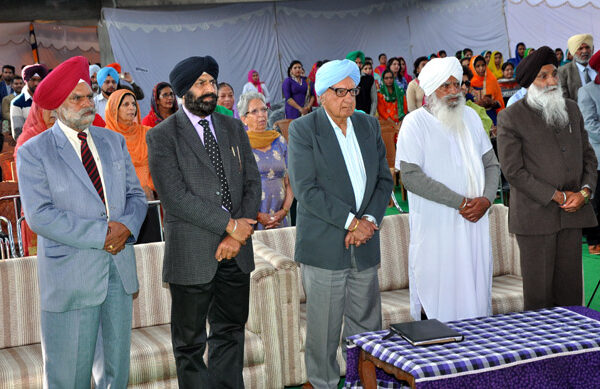 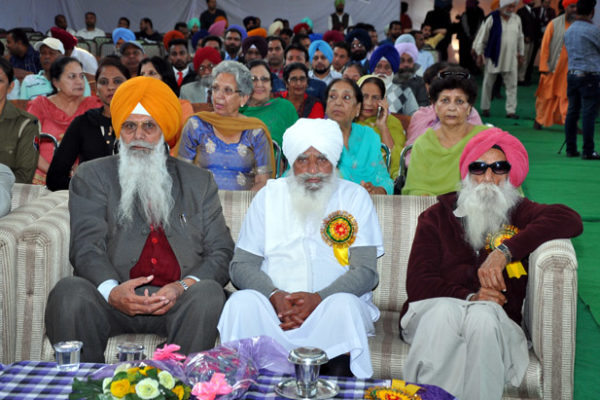 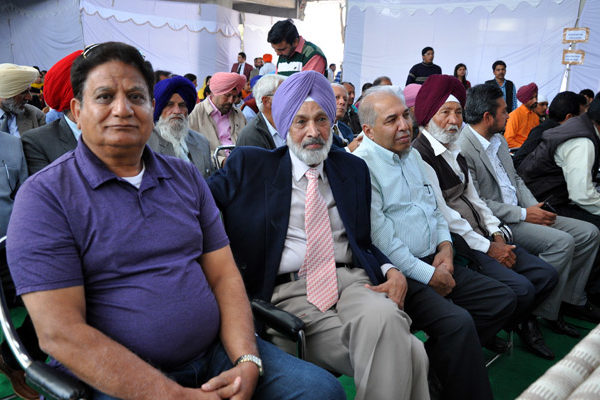 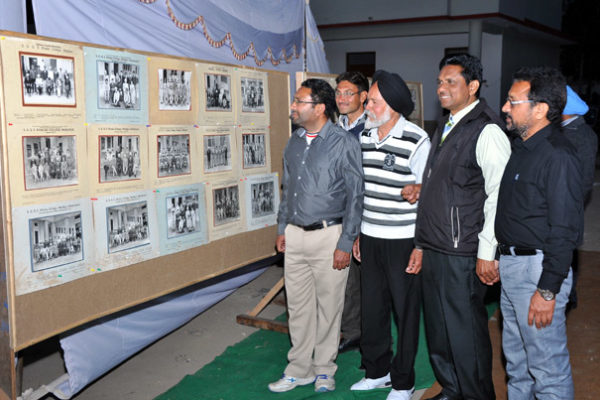 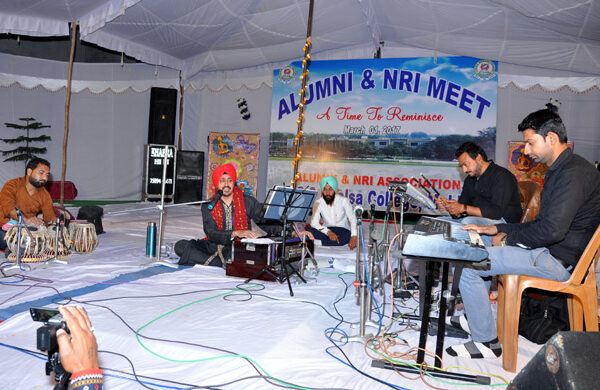 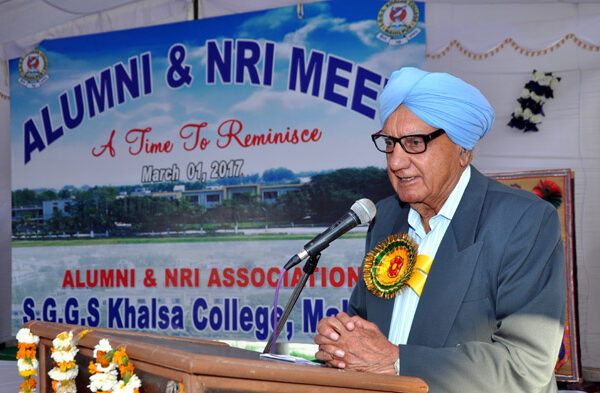 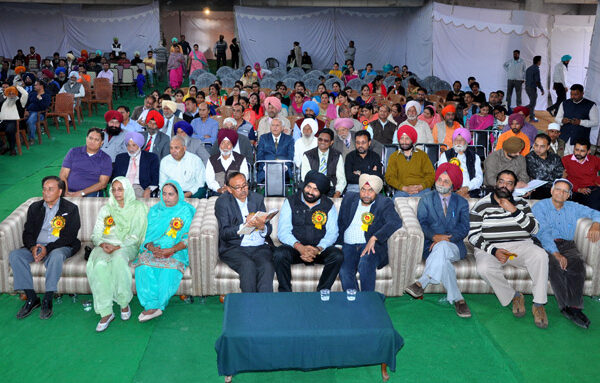 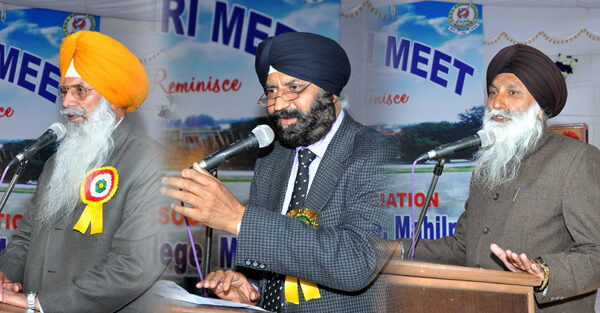 Olympian Jarnail Singh Dhillon was born in the year 1936 at village Panam, distt. Hoshiarpur. He was a star defender – Striker who played for Khalsa College Mahilpur, Punjab in the year 1952-56, Khalsa Sporting Club, Punjab in the year 1956-57, Rajasthan Club, Calcutta in the year 1957-58, Mohun Bagan Athletic Club, Calcutta in the year 1958-68. He worked as a coach for the Indian National team, Punjab Santosh Trophy team, District Sports Officer and was promoted to a position of a deputy director and then to the position of Director with Sports Department of Punjab. In 1964, as recognition of his game, he was awarded “Arjuna Award”. Mr. Dhillon captained Indian Team from 1965-67, Asian All-Star team from 1965-66 and 1966-67. He took his last breath on October 13, 2000.

Arjuna awardee Gurdev Singh Gill, born in village Kharar Achharwal gained his education from Khalsa College Mahilpur. He represented India in various international football tournaments and coached Punjab soccer team in early nineties.
Gurdev Singh Gill played in Asia Cup in 1970, Agha Khan Gold Cup Tournament held in 1978 in Dhaka where he was declared the best player of the meet. He also donned national colour in the pre-Olympics tournament, played at Rangoon in 1972. He participated in the Asian Games in 1974 at Trehan and then in 1978 in Bangkok where he led the Indian team. He was the member of the East Bengal Club squad in 1979 and then captained the Punjab football team for twelve consecutive years from 1976 to 1988. He served as the coach of the state football team between 1990-1994 and remained manager of the team for four years 1995-1998.

He served as sports secretary, Punjab Police, from 2002 to 2004. He was decorated with the Arjuna award in 1978-1979, with Maharaja Ranjit Singh award in 1984-1985, footballer of the Millennium by Delhi Sports Journalists’ Association in 2000, besides police medal for meritorious services in 2000. Gurdev Singh Gill retired as commandant in April 2008.

Sh. Hans raj Swan was born at the village Sakrooli near Mahilpur on 15th July1930. He served as an IPS Officer for over 25 years in the States of Punjab and Haryana in various capacities holding different, important assignments and finally as Director General of Police, Haryana State (Chief of Police) from which position superannuated at the age of 58 on 31st July, 1988. Presently, he resides with his family in Sector6, Panchkula, Haryana.

Professor G.S. Randhawa was the 5th Vice Chancellor of Guru Nanak Dev University and almost three tenures (8 years). He remained Vice Chancellor during 1989-1997, which was the most turbulent period in the recent history of Punjab. However, he managed the university including its growth extremely well. Most of the university buildings were constructed during his tenure. He has the distinction of starting the maximum number of academic programmes in the university. He was very articulate and successful in getting huge grants for the university from university grants commission and other sources. Before becoming the Vice Chancellor of Guru Nanak Dev University, he was Principal and Professor of English Literature at Khalsa College, Delhi. He lives in Chandigarh and is passionate about Urdu poetry.

Sandhu, Gulzar Singh was born at Kotia Badia, district Ludhiana in 1935, his mother’s native place. His family hails from the village of Soni in district Hoshiarpur. Both from the father’s side and the mother’s side, he draws upon a lineage of Jagirdars or fief-holders from the time of the Sikh rule, but by no means aristocrats in worldly possessions. Sandhu did his B.A. from the Khalsa College, Mahilpur, in 1953, and later did his M.A. in English Literature from the Punjab University. He migrated to Delhi and secured an editorial job in the well-known Punjabi monthly, Pritam. Later, he switched over to a sub-editor’s job in the Punjabi section of the Publications Division of the Indian Council of Agricultural Research.
He has four collections of short stories to his credit, entitled Husan de haani (Peers of beauty, 1962), Ik sanjh purani (An old association, 1965), Sone di itt (A brick of gold, 1970) and Amar Katha (Immortal story, 1979) which was picked up for the Sahitya Akademi Award for the year 1982. His stories give an insight into the social and economic conditions prevailing in the villages of Punjab. There is one prose work to his credit, entitled Sade har shingar (1958), and a translation into Punjabi of Maxim Gorky’s work, titled as Jivan te sahit (1961).
. Among other awards he was also the recipient of International Association of Authors, Playwrights and Artists of Canada in 1992 and Shiromani Punjabi Sahityakar Puruskar from the Education Department of Punjab in 2001.

Kamal, Ajaib Singh was born in the family of Babu Jung Singh at Village Dandin (Distt Hoshiarpur, Punjab). After completing his earlier education in his own district, he got his higher education in Khalsa College Mahilpur and then in Khalsa College Amritsar. He is a poet who has successfully travelled from traditionalism to modern sensibility. He started his literary career as a writer of ghazals but soon shifted to other forms of poetry.
He has written some successful verse-dramas such as Chaanak Anne Han, Hatheli te-Ugya Shehr, Dahri Wala Ghora, Urf Unniso Narrinve, and Langra Aasman. His forte is long poems, the dearth of which is very much felt in the realm of Punjabi poetry. His famous long poems are ‘Khia Vich Latkde, Manukh’, ‘Ekotar so’ ‘Akban Wala Mahabarat’, ‘Singan Wala Devta’, ‘Khali Kursi da Dukhant’, ‘Banere te Baithi Aukh’, ‘Africa vich Nailer been’, ‘Likhtam Kala Ghora’, etc. He has also written a few novels and books of criticism, but he is mainly known as a poet. Being a rebel by nature, he makes artistic and forceful use of satire in his poems.

Born in Punjab, Khabra attended Khalsa High School and Panjab University, earning a degree in Social Sciences. He served in the Indian Army between 1942 and 1946, and emigrated to the United Kingdom in 1959.
He pursued careers as a teacher and social worker, becoming a leading member of the Sikh-Briton and Asian community in Southall. He was also a leading figure of the Indian Workers’ Association and was active in stiff opposition to the far right on many issues over the years. He became a Justice of the Peace in 1977 and entered Parliament in 1992.
Khabra was a member of the Constitutional Affairs Select Committee and had a special interest in Punjab and India. Khabra, an MP with the country’s ruling Labour government and the best known Sikh-Briton politician, represented the Ealing Southall riding and became the member of British House of Commons in 1992. At 82, he was the oldest member of Britain’s House of Commons, when he passed away following complications with his liver at the Hammersmith Hospital in London, England, on June 19, 2007.
Prime Minister Tony Blair led MPs in paying tribute to him in the House of Commons. He said: “He was a tireless campaigner, particularly on the issues of international development and racial equality. He was a tremendous servant to his constituents. He will be greatly missed and our thoughts and prayers are with his family at this time”.

Dr. Raghbir S. Basi is chairman of Village Life Improvement Foundation (www.vlif.in) and is a former Provost and Emeritus Glenn and Eva Olds Professor of International Understanding, Alaska Pacific University, Anchorage, Alaska. His areas of special interest are Economic Development, International trade and Finance, and organizational Administration. He taught at New York University and at Kent State University from 1960 through 1978, where he also held various administrative positions, including Founder/Director of the Center for Peaceful Change and President of the World Affairs Council. He also served in 1963 as Consultant to the Planning Commission of India and from 1967 to 1970 on behalf of the Ford Foundation as Senior Economic Advisor to the Government of Saudi Arabia. In 1978 he joined Alaska Pacific University as Executive Dean and later became Provost. While there he hosted in 1984 a world class conference on large projects during which he drafted the Anchorage Declaration to launch Mitsubishi’s visionary chairman Masaki Nakajima’s Global Infrastructure Fund (GIF) of Tokyo, Japan. He also served as Managing Director of the Anchorage World Trade Center (1986-87) and as President of the Board of Directors of Chugach Electric Corporation (1987-88); a billion dollar utility in anchorage.
Dr. Basi was educated at Panjab University (F.A.) in India, the University of British Columbia
(B.A.-Honours; B.S.W.) in Canada, and Harvard (M.P.A.) and Cornell (Ph.D.) Universities in the United States. His latest book is Contextual Management: A Global Perspective, published by the Haworth Press, New York in 1998. He has also translated Professor Mohan Singh Mahir’s Punjabi poetry into English Ambient Leaves publish by Five Rivers Publishers, Inc., Washington, D.C., and Jallandhar Pb in 2005.
While a student in the 1940’s at Sikh National College Lahore and later at S.G.G.S. Khalsa College Mahilpur, he was the Secretary of the Student National Congress. At UBC in 1952 he was the first Indian to become president of the Alma Mater Society (Student Union) and in 1953 he was the first foreign student to be elected President of the National Federation of Canadian University Students (NFCUS). Dr. Basi was also the first Indian to have been appointed Provost of an American University – Alaska Pacific – where he was the Glen and Eva Olds Professor or International understanding until his retirement in 1999. He took early retirement to start practicing what he had learned and taught over the prior 35 years of experience – namely to spearhead the Village Life Improvement Foundation (VLIF) program. Presently priority focus is on grassroots entrepreneurship education to transform traditional village societies into entrepreneurial economies in Punjab.

Down The Memory Lane 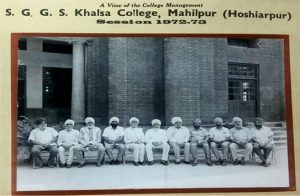 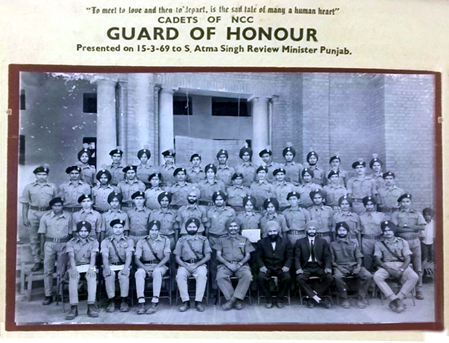 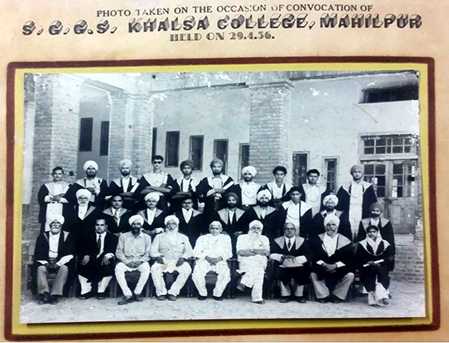 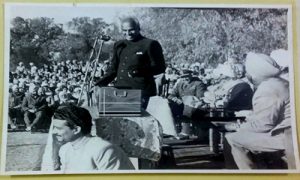 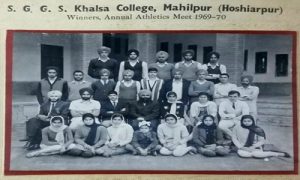 Regular Posts for Assistant Professor(3) in Department of Physical Education